On the 6 February 2017, Tom Bailey – the 2017 Leverhulme Artist in Residence at UCL Geography’s Migration Research Unit, and founder of the Mechanical Animal Corporation – organised and led a “Refugee Theatre Workshop” at UCL. The workshop drew on his experiences working in ‘the Jungle’ camp in Calais, where he helped run a ‘Theatre of Hope’ established by Good Chance Theatre.

As part of his involvement with the Good Chance Theatre, Tom Bailey led performance workshops with refugees and asylum seekers. These focused on improvisation and physical theatre, rather than on scripts, encouraging an ‘ensemble-led’ approach. The idea was that, through the workshops, participants would perform their own stories – of their journeys and encounters. The shells of well-known myths, from Odysseus to fairy-tales, structured the workshops, yet the key narrative devices were the refugees’ own stories.

What lessons might we learn about the viability of such techniques for our Refugee Hosts project, given our project’s aims to meaningfully engage with diverse narratives around refugee-host encounters, including through creative workshops with members of diverse refugee and host communities?

During the UCL workshop, Bailey shared with us some of the particular challenges and opportunities that arose from the Theatre of Hope initiative in Calais. As an antidote to the everyday dullness, wetness and coldness of camp life, where few communal or social spaces exist(ed), the theatre – which took the form of a geodesic dome – offered some respite. However, the camp’s internal political dynamics, as well as the external pressures placed on the camp’s residents by the French authorities (and touring performance companies….), also made the space a frequently contested one. Access to the theatre space therefore generated unexpected tensions within and between groups, a well-documented if not unexpected outcome of many humanitarian initiatives.

This tension can, in many ways, be explained by the seemingly substantial significance many refugees and asylum seekers in the Calais camp attached to the space. This significance went beyond practical considerations, such as the availability of shelter (although even here, as Elena Fiddian-Qasmiyeh has argued, different forms of ‘performance’ are often helpful when it comes to refugees’ attempts to secure practical humanitarian assistance). As Bailey explained during the workshop, the theatre space allowed those who came into it to engage in activities that encouraged “self expression where there is none”. To paraphrase: the various performances expected of ‘the refugee’ in Calais have typically been pre-scripted – they are at any given moment presented as the indistinguishable mass of vulnerable ‘women-and-children’, as the ‘bogus refugees’ = ‘economic migrants’, as the would-be terrorists or the grateful receivers of aid. In the theatre space, by contrast, Bailey argued that those involved in different workshops or activities had a say over their own stories: they were able to express themselves, and their self.

This was reflected in the methods used by Bailey and other artists involved in the initiative. For many who came to the theatre space, theatre in the established sense of the word – scripts, rehearsals and so on – was not a priority. Physical performances and improvisation were preferred, in part because such techniques encouraged a more dynamic expression of self, or of community, free from the arbitration of a ‘director’ (or of an asylum official or border guard for that matter). 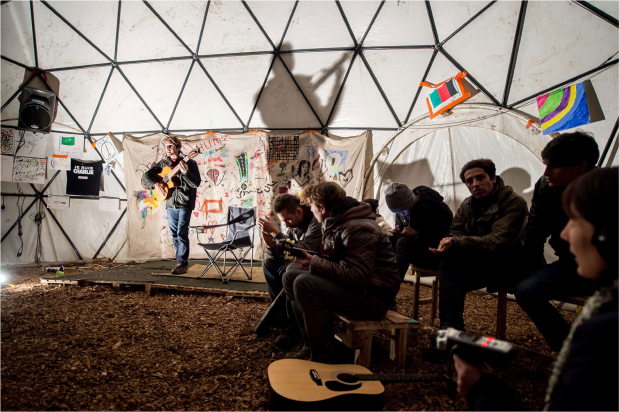 This point about self-expression, of the expression of a community, and transcending normative scripts certainly stands out, not least of all because of its relevance to the work of the Refugee Hosts project. We are interested in re-framing mainstream debates surrounding the ‘humanitarian narrative’, which typically results in the ‘silencing of refugee experiences’ and the ‘framing of refugees as suffering victims’.

Indeed, variants of Bailey’s physical performance methods are often used as ‘warm up’ activities in creative  workshops, and a number of improvisation techniques will invariably be incorporated into our project’s writing workshops in Lebanon, Jordan and Turkey over the coming months and years. In effect, one of our project’s starting points is the following recognition: that by creating a critical space for participants to document, trace and resist experiences of and responses to displacement – whether through poetry, music and/or performance – nuanced and dynamic reflections about refugee-host encounters and journeys of displacement (and hosting) may be developed, and collectively explored with and by participants themselves.

Of course, consideration has to be given to the various challenges involved in putting such approaches into practice in a project such as Refugee Hosts: How can we ensure the spaces in which the creative writing workshops take place are able to facilitate participants’ ‘self-expression’? What might this even ‘look’ like – or sound or read like? Indeed, how can spontaneity and creativity be fostered, or ‘hosted’, in a workshop, irrespective of how participatory we aim to ‘make it’? These are important questions, and thinking carefully about them now offers important opportunities for us as we continue to develop Refugee Hosts’ approach to working with refugees and local hosting communities in Lebanon, Jordan and Turkey.

Ultimately, engaging with a range of theatre and performance techniques appears important in part because Bailey’s experiences help to corroborate the value of a range of creative approaches to the study of conflict and displacement. For example, academics, researchers and artists who have explored the meaning of statelessness and exile through poetry and creative writing have helped to change our understandings of displacement, and engender a sense of ‘self’ that is often lost through the simple assumptions held by many when it comes to who is and who is not a refugee.

Indeed, as Refugee Hosts‘ Co-I Lyndsey Stonebridge has argued on this issue, poetry becomes a useful and profound means of exploring what it is to be displaced and stateless – poetry is self-expression: ‘it cannot be ours to authenticate’. Such themes likewise run throughout the writings of Yousif M. Qasmiyeh, our project’s writer in residence, whose poetry and academic work  shed light on ‘the face of the refugee’ as an embodiment of absence and presence simultaneously: it is “the face that has no place to turn to and yet remains where it is, to feign its presence”.

Refugees ask other refugees, who are we to come to you and who are you to come to us? Nobody answers. Palestinians, Syrians, Iraqis, Kurds share the camp, the same-different camp, the camp of a camp. They have all come to re-originate the beginning with their own hands and feet.

Importantly, creative methods may enable diverse forms of ‘self-exploration’ and ‘self-expression’, but they can (and perhaps should) also simultaneously provide a space for participants to transcend and resist different forms of externally imposed expectations. This can include providing a space to resist the expectations inherent within the scripts referred to above – of the vulnerable/ violent/ bogus/ grateful refugee -, but also the very expectation that participants will (or should) be performing in an ‘authentic’ way and ‘revealing’ their ‘true self’ during workshops. Indeed, as Lyndsey Stonebridge has argued here on Refugee Hosts:

Poetry is not therapy, and writing is only creative to the extent that can be accommodated between people. It is a kind of host. We will be developing and exploring the kind of hosting that poetry and translation can make possible throughout Refugee Hosts.

Meaningfully engaging with diverse narratives around refugees’ encounters in different spaces requires us to continue thinking critically about the different roles that diverse creative practices can play when conducting research with people affected by conflict and displacement.