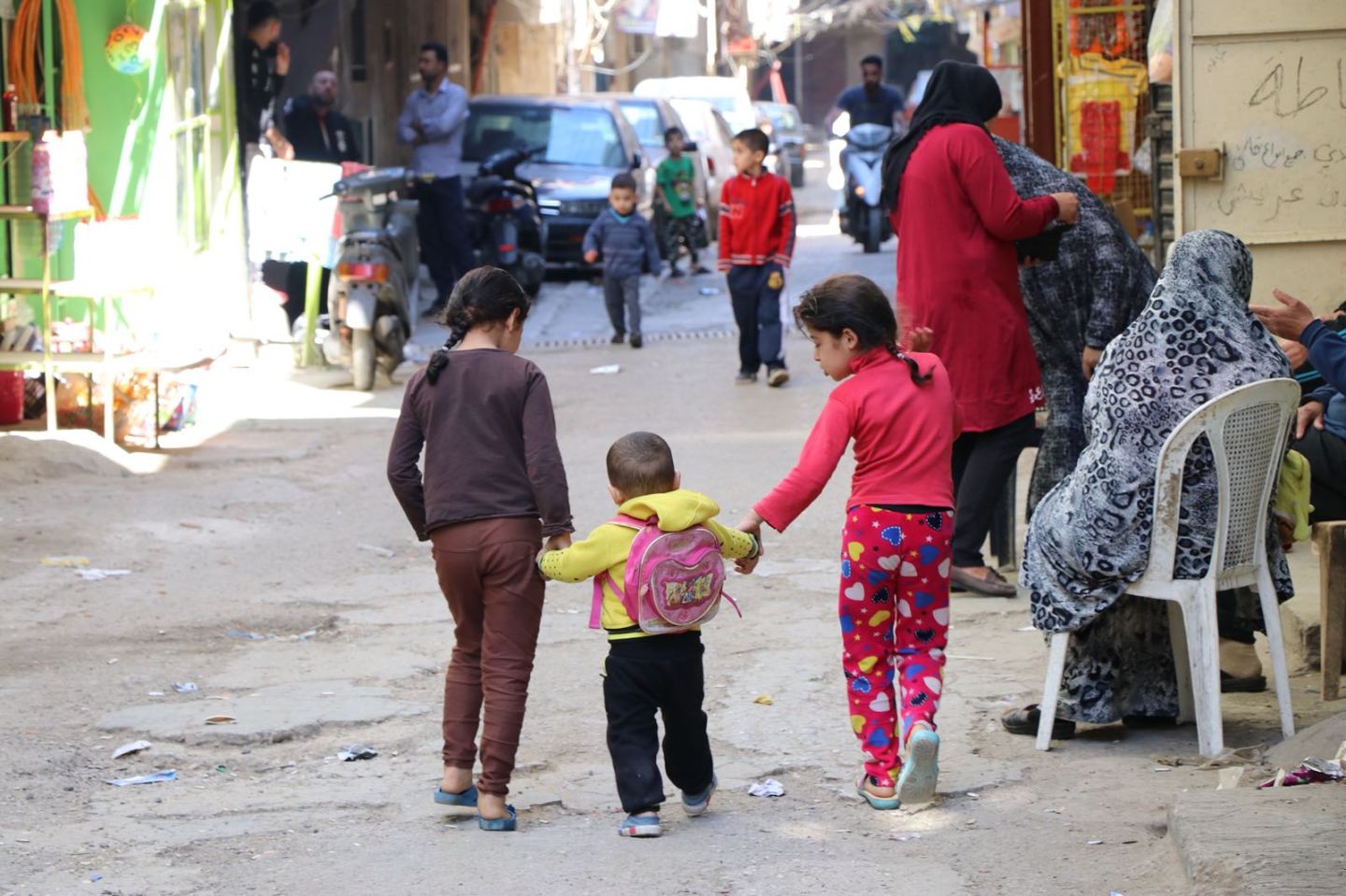 The Localisation of Aid and Southern-led Responses to Displacement

The Localisation of Aid and Southern-led Responses to Displacement: Beyond instrumentalising local actors

Displacement is primarily a ‘Southern’ phenomenon, with around 90% of all refugees having fled from one country in the global South to another Southern state, through processes of South-South migration. It is equally the case that key responders to displacement include a wide range of actors from the global South, ranging from communities, households, families and individuals, in addition to states and regional organisations.

The responses developed by host communities (including local faith communities) and refugees-hosting-refugees that we have been exploring through Refugee Hosts – including my own work on the roles of established Palestinians in supporting refugees from Syria – can, in this regard, both be examined through the framework of ‘locally-provided aid’, but also as one of a wide range of ‘Southern-led’ responses to displacement.

Importantly, although Southern-led responses to displacement in and across the global South have existed throughout history and across geographies, Southern responses have nonetheless often been overshadowed in academic and policy literature by the widely-held assumption that ‘humanitarian’ responses to displacement are developed and funded by Northern members of the ‘international humanitarian community’ and implemented in the global South.

Indeed, it is only relatively recently that the ‘international humanitarian community’ – including UN agencies, International Non-Governmental Organisations (INGOs) and rich donor states – have recognised, and taken steps to support, the roles played by diverse Southern-actors in responding to displacement. To this end, our latest Refugee Host blog series has been exploring how, why and with what effect specific local responses to displacement have been mobilised and indeed ‘institutionalised’ via the ‘Localisation of Aid’ agenda.

In essence, the localization of aid agenda has been grounded upon an official acknowledgement of the roles played by specific actors – national and regional actors more so than local communities – in responding to displacement, and of the related need for ‘the international system’ to support such ‘local’ responses in different ways.

Here, the recognition that a plurality of actors – in particular regional organisations and national actors – are involved in responding to displacement has been matched by the international community’s stated commitment to change its mode of operation and the funding of response mechanisms. This is a notable shift, even if it is arguably itself largely a response to the various financial and political crises which have led to pressures on European and North American states’ aid budgets.

Indeed, the very process of enhancing the roles of, and institutionalizing specific ‘Southern actors’ within the context of the localization of aid itself requires careful analysis, including a reflection on which actors are supported and which are excluded (or themselves wish to remain separate) by and from the international system.

Beyond the incorporation of ‘local’ actors

The ‘incorporation’ and indeed ‘instrumentalisation’ of Southern actors by the international community raises numerous questions and concerns. In particular, we must continue to be critical of the extent to which the localization agenda may be a way for Northern states to shift resources, and responsibilities, onto Southern actors, or to simply withdraw from international responsibilities without sharing the promised funding and resources (Fiddian-Qasmiyeh 2015).

In this context, we can view the localization of aid agenda as promoting a particular form of North-South relations, in which Northern states have recognized and are increasingly mobilising Southern actors to ‘share the burden’ (precisely through ‘shifting the burden’, or ‘keeping the burden in the South’) in undertaking assistance and protection activities (Fiddian-Qasmiyeh 2017).

However, beyond incorporating Southern regional and national actors into the ‘international system’, I would argue that we also have a prime opportunity to reconsider the role of ‘local’ actors in and of the global South, in developing alternative modes of response which can at times work alongside or explicitly challenge ‘normative’ Northern-led responses (Fiddian-Qasmiyeh 2015).

This of course draws attention to one of the major paradoxes inherent in the localization of aid agenda: it aims to ‘support’ specific ‘local’ (read ‘Southern state and regional’) responses precisely by institutionalizing them within the broader paradigm and parameters established by the ‘international system,’ even when that international system has previously actively dismissed and mistrusted those actors.

(As an aside, it is of course essential to note that not all Southern actors are supported equally, or indeed even viewed as being worthy of support – for instance, the localisation agenda still prioritises states and regional organisations while struggling to engage with ‘local’ communities, including communities of faith; and of course particular states and transnational networks are excluded from ‘the international humanitarian community’ when they are perceived to be ideologically-motivated rather than driven by ‘humanitarian’ principles)

In effect, the mainstreaming of support for specific Southern-led initiatives by UN agencies and Northern states is especially paradoxical when situated within the context of South–South cooperation – the processes through which actors from the global South have historically engaged with and supported other actors from the South. This is because South-South cooperation was purposefully developed in the era of decolonization as a necessary means to overcome the exploitative nature of North–South relations, and has historically been associated with the Non-Aligned Movement, and anti-colonial and anti-imperialist struggles.

As such, as part of my new Southern Responses project (funded by the European Research Council – see SouthernResponses.org) I argue that a focus on Southern-led responses must transcend identifying and offering (certain forms of) support to specific actors from the global South (here, Southern states and regional organisations) in order for them, in turn, to support the aims and objectives set by the international community.

Instead, analyzing Southern responses to displacement from Syria by states as diverse as Malaysia, Lebanon and Cuba, and by transnational faith networks and groups motivated by solidarity and refugee-refugee humanitarianism, invites us to consider what role diverse forms of South-South relations, including South-South cooperation, may play in terms of responding to displacement on different levels and across different scales.

It also enables us to explore what role the principles of South-South cooperation might have in reconceptualising existing, and formulating new or hybrid forms of response. These must include responses that challenge structural inequalities, including inequalities created and perpetuated by different actors from across the international system.

It is this relationality between diverse actors between and across the global South, at all scales, levels and directionalities, and the different principles, motivations and modes of action, that we will continue exploring in detail both across the Refugee Hosts project (which focuses in particular on the relationship between host communities and refugee communities (including refugee-hosts) and the new Southern Responses project.

This new project is examining, and bringing into conversation, different Southern state and non-state responses to displacement from Syria through processes including internationalism, solidarity, faith-based humanitarianism and refugee-refugee humanitarianism. Importantly, it aims to centralise the ways in which people affected by displacement themselves conceptualise, engage with, negotiate and resist these different Southern-led responses to displacement.

Fiddian-Qasmiyeh, E. (2016) “Refugee-Refugee Relationality: Hospitality and ‘Being With’ Refugees”

Grewal, Z. (2018) “A Successful Alternative to Refugee Camps: A Greek Swat Shames the EU and NGOs”

Jayawickrama, J. and Rehman, B. (2018) “Before Defining what is Local, Let’s Build the Capacities of Humanitarian Agencies”