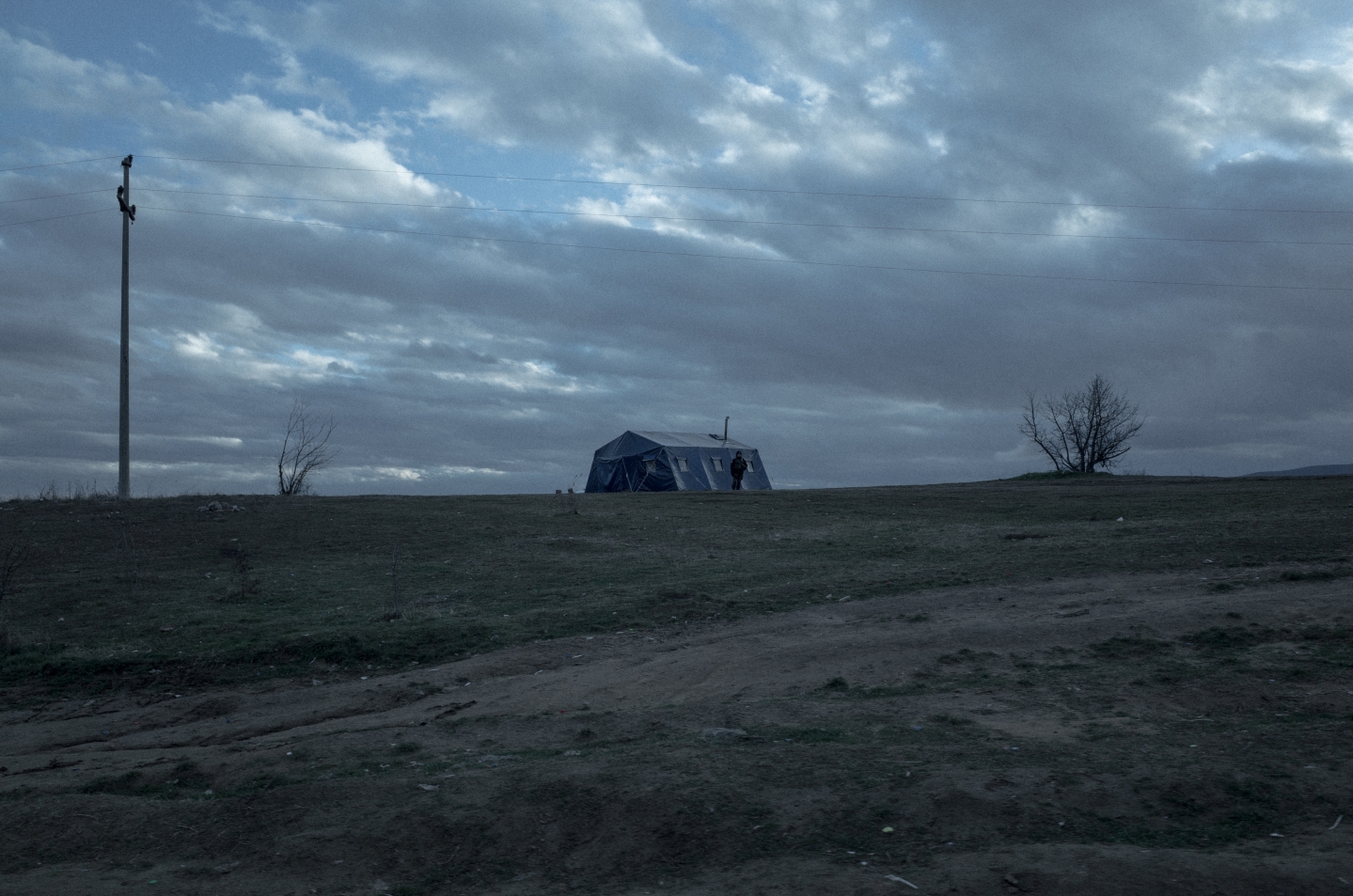 In this piece, Dominika Blachnicka-Ciacek explores the problematics of photographic representations of singular suffering refugees and their impact on political discourse in Poland. In a challenge to this, Dominika reflects on her own approach to representations, reflected in her “Refugees. Present/Absent” exhibition, which sought to focus on the materiality of everyday experiences and the refugee journey as a way to rebuild compassion and humanity into depictions of refugees. This mirrors our own project’s “spaces and places, not faces” approach, which we are exploring as part of our Representations of Displacement Series.

In the Middle Ages, public executions of convicts were important media events in the medieval city. Organized on a main square in the town, executions were designed to be a spectacle. The medieval execution was cruel and frightening, but also performed to entertain and induce a vicious excitement. The audience was supposed to feel uplifted through the sense of relief that ‘it is not me’. But the execution was also there to frighten, make insecure and evoke the feeling that ‘it could have been me’ , thus inviting obedience to power and authority.

It seems to me that the so-called ‘refugee crisis’, which has been evolving on our screens since mid-2015 has become, not unlike the performance of medieval executions, a media spectacle. I argue that this spectacle has less to do with the fate of the people it claims to represent, but is instead calculated to invoke moral panic and endorse a state of exception among Western audiences. And what about ‘us’, the audience? By repetitively consuming images of people suffering in the Mediterranean, have we become complicit in their fate?

The ‘spectacle’ of suffering

Susan Sontag observes that there is an internal contradiction in media portrayals of suffering taking place in ‘remote’ (from the perspective of the viewer) locations. They evoke compassion and horror, and yet, instead of calling to action, they also have a calming effect on the viewer – of reality taking place at a ‘safe distance’. The photograph of the body of little Aylan Kurdi washed up on a Turkish beach made headlines around the world, shifting the ‘public mood’ in relation to the ‘refugee crisis’. However, was this really the case? Was Turkey ‘close enough’ to demand an outcry? Was it about Aylan’s suffering, or the people drowning in the Mediterranean before and after him? Or was it about ‘us’, the onlookers, and our sense of comfort and discomfort?

Hypervisibility and invisibility of the displaced

In contrast to some approaches which highlight the suffering individual through photographs, I would echo Refugee Hosts’ assertion that focusing on ‘spaces and places not faces’ can potentially help us understand the complexity, relationality and everydayness of displacement.

In November 2016, I built on this idea when preparing an exhibition about representations of the ‘refugee crises’ in Poland with Przemysław Wielgosz, the co– curator of the event. The idea for the exhibition emerged from our dismay that the so-called ‘refugee crisis’ had become the single biggest political issue in Poland, despite receiving hardly any refugees from the Middle East or Africa. Since 2015, people fleeing to Europe – voiceless, powerless and, largely, absent – have become the major target of a hateful campaign pursued by the right-wing government. Despite this, no other institutions in Poland – the private media, other political parties, or the Catholic Church – challenged the hateful and racist language used by the government and state-run media. Soon, racialized and Islamophobic depictions of refugees, who were presented as a cultural and even biological threat, overshadowed forms of compassion that focused on the human dimension of displacement. By early 2016, in a country of 40 million people, the majority of Poles resisted accepting just 7000 asylum seekers as part of the EU relocation scheme, which was seen as a threat to Polish identity, culture and safety. 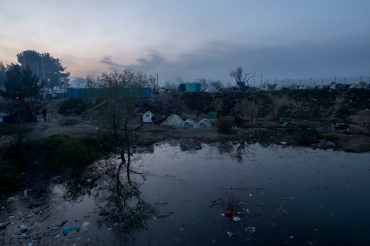 Lake and tents on the refugee trail (c) Mikolaj Dlugosz 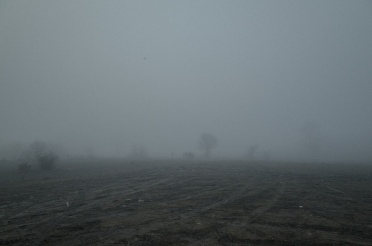 The exhibition, which we called ‘Refugees. Present/ Absent’, was held in Kraków at Galeria Księgarina/Wystawa, and run by Pamoja Foundation. It was our attempt to engage with the horrifying paradox of refugee hypervisibility/invisibility in Poland, and to offer a critical response to the ways in which the figure of ‘the refugee’ has been hijacked by the right and abused for their own short-term political goals. The aim of the exhibition, and the accompanying cultural programme, was to expose the dehumanizing and demonising mechanisms of refugee representations in public discourse, in which refugees are reduced to a ‘threat’: the ultimate ‘other’. We wanted to engage in a discussion about the strategies of recovering the humanity of displacement and to explore experiences of flight and of being stuck at the European borders.

Turn to places, spaces and material traces of displacement

To break away from the fixity of visual representations, we turned to the spaces, places and objects that had ‘witnessed’ people’s flight across the Balkans. The photographs of Mikołaj Długosz and Kuba Czerwiński, taken on the so-called West Balkan Route, focused on the traces and material proof of refugee flight across Europe. They looked to the backyards of the Albanian Preševo in Serbia, where asylum seekers stopped to rest, to the petrol station and the adjacent meadows on the outskirts of the town of Idomeni in Greece, where people slept in the absence of much needed infrastructure. Finally, their lenses looked at the architecture of control – border crossings, registration centres and train terminals – the sites and agents of power that regulated and constrained the movement of people across the borders. There are no close- up, no photos of children, no attempts to exoticize the displaced, no desire to highlight the ‘difference’ between us and them. Długosz and Czerwiński’s photographs were interested in traces of refugees’ everyday lives: rubbish, abandoned blankets and wet clothes – remains of refugees’ material presence and the temporariness of their existence. 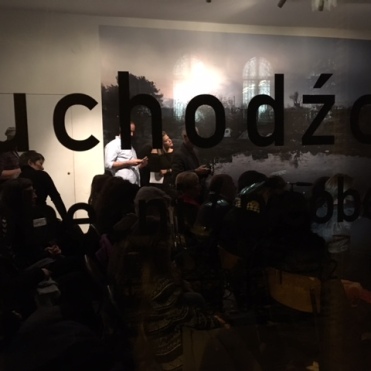 This shift of focus has enabled us to create a different framework of conversation that – we believe – is less bound by an ideological appropriation of the refugee narrative. The focus on materiality – on remains and traces – has helped us to move the conversation about refugee experiences to a different ground, rooting representations of displaced peoples in the physical and material aspects of their flight. The focus on materiality somehow enabled us to shorten the distance and turn our gaze away from the obsession with the identities and ‘otherness’ of refugees, in order to rebuild a sense of compassion instead. The leftovers, used clothes, wet blankets, tents have become the ‘sites’ which help us to actualize what has happened and recover the human condition of the displacement. As Przemek observed:

It was in these wet blankets, in the abandoned shoes that the photographs – the reality which we have strived so hard to ignore –  have helped us reclaim space not only for a critical analysis of political and economic reasons of displacement, but also, when thinking about European politics – its function in managing the European crisis and legitimizing the ‘state of exception’.

You can view an archival website of the exhibition here.

For more pieces from our Representations of Displacement series click here.