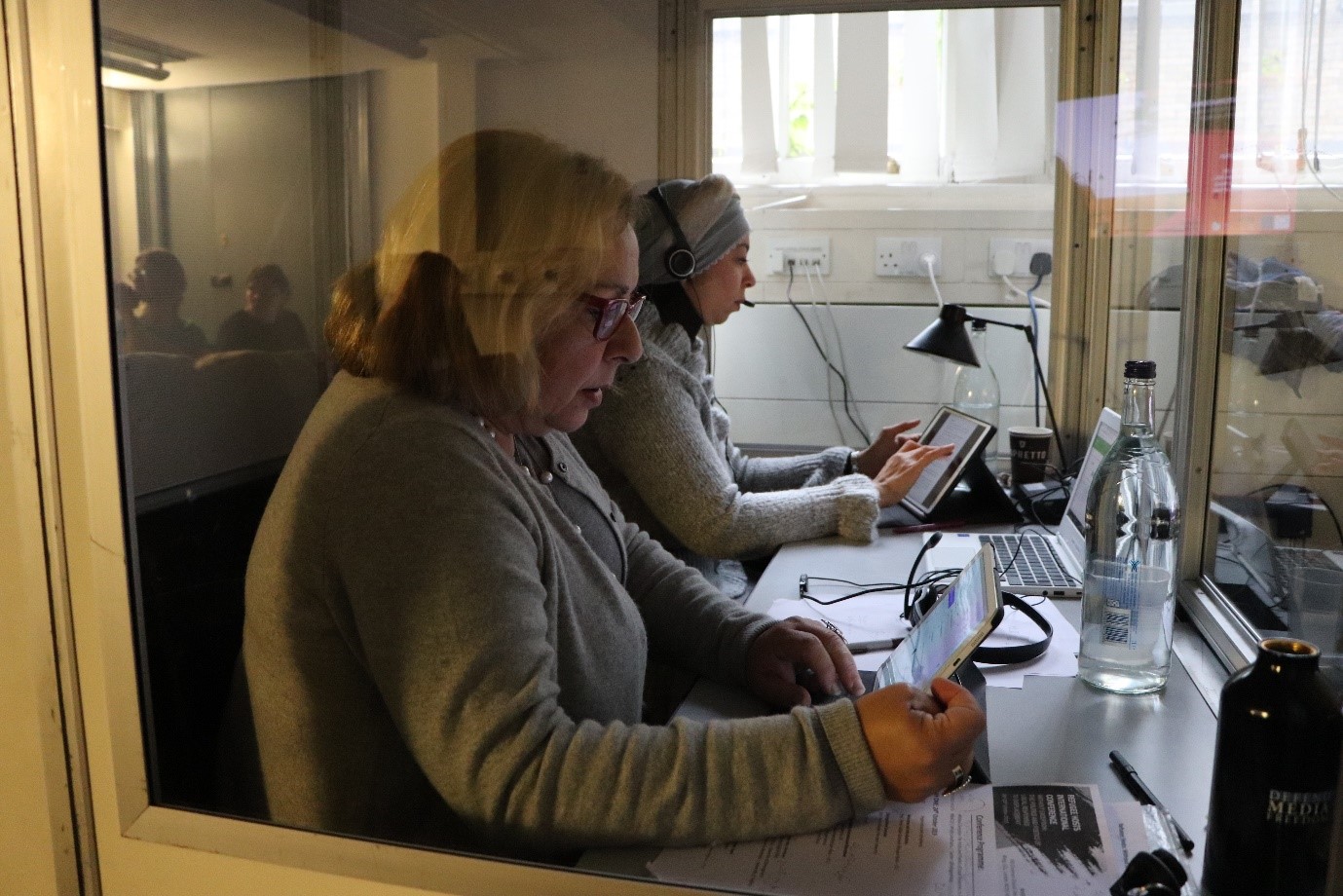 One of the main aims of Refugee Hosts’ research has been ‘to reframe debates about the roles and experiences of local communities and refugees in contexts of conflict-induced displacement.’ In particular, through developing a ‘more nuanced understanding of the challenges and opportunities that arise when local communities engage in activities designed to enhance the quality of life of displaced populations,’ the research aimed to ‘inform the development of policy, practice and service provision at local, national and international levels.’ To this end, Refugee Hosts’ Principal Investigator, Co-Investigators and writer in residence have undertaken a number of public engagement activities on screen, radio and within public spaces to ensure the findings of our research are disseminated as widely as possible.

Watch the accompanying videos developed alongside our end of project Research Notes.

Histories and Narratives of Displacement

Critical Approaches to Voice and Writing in Displacement

Watch the highlight video of our 2019 International Conference – ‘Without Exception: The politics and poetics of local responses to displacement.’

On 24 and 25 October 2019 Refugee Hosts hosted and live-streamed the Refugee Hosts International Conference, with a series of keynote lectures, panels, roundtables, and artistic interventions exploring themes that are key to our project. You can watch a recording of the live stream here and comment on any of the material on Twitter, by using the hashtag #RHIC19 and tagging @refugeehosts. Below is a brief highlight video spotlighting some of the main themes and speakers.

In this seminar, which is part the Yale PRFDHR Spring 2021 Virtual Seminar Series, Prof. Fiddian-Qasmiyeh traces the different ways that residents of Baddawi refugee camp in North Lebanon have been affected by COVID-19 since March 2020, and how they have been responding to protect themselves and other conflict-affected people in the midst of the pandemic. Responses by residents of Baddawi camp include processes that resonate with a long history of refugee-led mutual aid initiatives which Prof. Fiddian-Qasmiyeh has explored further here and here. In this context, focusing on the responses developed both by and for Palestinian and non-Palestinian residents highlights the importance of relationality. By delineating the rapidly developing situation in Baddawi camp since March 2020, Prof. Fiddian-Qasmiyeh argues that it is critical that we consider the significance of relationality when discussing refugee-led responses and how such initiatives relate simultaneously to 1) the politics of the self and the other, 2) to politically-produced precarity, and 3) multiscalar systems that undermine the potential for solidarity in times of overlapping precarities.

You can watch the seminar below:

Watch Prof. Elena Fiddian-Qasmiyeh speak on ‘The Ethics and Politics of Representation’

On 16 March 2021, Prof. Elena Fiddian-Qasmiyeh spoke about ‘The Ethics and Politics of Representation’ at the Power and the Politics in/of Ethnographic Research Seminar Series, hosted by University College London. This seminar was the fourth in a series of events organised by the PAPER project which aims to addresses questions of decoloniality (anti-racism, anti-colonialism, class, (dis)ability, and gender/sexual discrimination) in ethnographic fieldwork. The seminar sought to answer the following questions: what do we choose to include in our written work, and what do we exclude? What responsibilities do we have to our research participants while writing or when sharing our work outside of the academy (e.g. to policy-makers)? How can we remain accountable to our participants throughout the writing process? Where is it important to maintain secrecy; where might it do harm? How can we acknowledge our political positionality both during data collection and dissemination and spaces of co-authorship.

You can watch the video here.

Refugee Hosts’ writer-in-residence, Yousif M. Qasmiyeh, took part in the UCL Institute of Advance Studies virtual festival, Alternative Epistemologies. The event combined readings by Yousif M. Qasmiyeh from his award winning book, ‘Writing the Camp‘ and reflections on Baddawi Camp, one of Refugee Hosts field sites, through conversation with Refugee Hosts’ PI, Prof. Elena Fiddian-Qasmiyeh and Dr Seth Ansizka, the Mohamed S. Farsi-Polonsky Associate Professor of Jewish-Muslim Relations at UCL. The event was on-line and free and took place on the 6th May 2021.

You can watch a recording of the event here.

Refugee Hosts was part of a major exhibition, ‘Refugees – forced to flee’ at the Imperial War Museum, London from the 24th of September – 13th June 2021. Refugee Hosts’ contribution to the exhibition includes a video featuring photographs, poems and stories gathered throughout our research in Lebanon, Jordan, Turkey and Europe. In the video, Prof. Elena Fiddian-Qasmiyeh discusses Refugee Hosts’ research and reads poetry by Refugee Hosts’ writer-in-residence, Yousif M. Qasmiyeh.

On the 18th of June 2020, Prof. Elena Fiddian-Qasmiyeh discussed Refugee Hosts on BBC Radio 3. The programme marks Refugee Week 2020 and highlights Refugee Hosts’ interdisciplinary approach to understanding local experiences of and responses to displacement, which is also featured in the Imperial War Museum London exhibition ‘Refugee: Forced to Flee.’ To find out more about Refugee Hosts’ research in Lebanon and Jordan, please see our Reflections from the Field Series, or visit our About the Project webpages.

To find out more about the Imperial War Museum exhibition, click here.

Refugee Hosts’ PI, Prof. Elena Fiddian-Qasmiyeh and Co-I, Dr. Anna Rowlands appeared on BBC 5 Live and LBC respectively, responding to the Governments’ proposed overhaul of the UK’s asylum system. In her interview on BBC 5 Live’s Drive programme, Prof. Fiddian-Qasmiyeh discussed the UK’s long history of preventing refugees from seeking asylum and of ‘reducing the space for protection’ and argues that the political rhetoric in the UK, that frames the UK as a ‘magnet’ for refugees, is continuously reproduced and yet erroneous when between 85-90% of refugees seek sanctuary within the  ‘global-South.’ In her interview on LBC, Dr. Anna Rowlands drew on interviews, interactions and conversations conducted within the framework of the Refugee Hosts project in our field sites of Lebanon, Jordan and Turkey, and also argued that refugees seeking safety often do so within the regions closest to their country of origin.  Moreover, she stated that the ‘end effect’ of the Home Secretary’s plans would be ‘cruelty’ and would have the reverse effect of what the plan intends, leading to  ‘more risk, more limbo and less safety.’

Refugee Hosts PI Prof. Elena Fiddian-Qasmiyeh discussed how Covid-19 is impacting people living in poverty around the world as part of a Channel 4 News broadcast. Prof. Fiddian-Qasmiyeh highlighted the diversity of national and international responses, including by Low and Middle Income Countries. She argues for global solutions based on principles of solidarity to address the global pandemic in ways that are inclusive and socially just.

You can read how refugees in Lebanon are responding to the COVID-19 pandemic in an article written by Prof. Elena Fiddian-Qasmiyeh and drawing on her Refugees Hosts research here.

Prof. Elena Fiddian-Qasmiyeh talks about the findings of a new report titled “Religion and Social Justice for Refugees”, which has been published in collaboration with Yale University, the British Council and the Refugee Hosts project. The report offers fresh insights into the roles played by faith-based actors and local faith communities in contexts of displacement in diverse contexts around the world. Drawing on over 300 in-depth interviews with refugees, members of local host communities and locally based organisations in towns, cities and camps in Cameroon, Greece, Malaysia, Mexico, Lebanon and Jordan, the report identifies and examines the ways that faith plays an important role in supporting social justice for refugees.

You can listen to the podcast and view the lecture slides, here.

Refugee Hosts PI, Prof. Elena Fiddian-Qasmiyeh, delivered her Inaugural Lecture: Refuge in a Moving World: beyond hospitality and hostility on the 10th of December 2019.

People have been displaced throughout history and across all geographies, and yet attention to displacement ebbs and flows across time and space. Most displaced people remain within their regions of origin, often facing a combination of hospitality and hostility, and developing different ways of responding to their own situations. This lecture traces the multiple ways that responses to displacement are enacted by people with personal and family experiences of forced migration, including in their capacity as researchers, writers and artists, and aid providers. Drawing on research conducted in camps and cities in the Middle East and North Africa, this lecture examines how different people experience and respond to their own situations (and that of others), in the presence of diverse barriers and structural inequalities. Ultimately, the lecture argues that working collaboratively through interdisciplinary approaches and methodologies has the potential to develop nuanced understandings of processes of migration and displacement, and, in turn, more sustainable modes of responding to our moving world.

Refugee Hosts’ writer in residence, Yousif M. Qasmiyeh, at Migrant Knowledge, Early Modern and Beyond: an event at the Crossroads.

This event brought together scholars, artists and activists to think about migration and what it does with, and to, knowledge.  The video features Yousif M. Qasmiyeh discussing his writing and reading an extract from his poem, ‘Thresholds.’

Prof. Stonebridge discusses her new book, ‘Placeless People’, Writing, Rights and Refugees’  which examines how writers and political thinkers understood and wrote about refugees.  The book traces their work from the mid 20th century to the present day, starting on the German/Czech border and ending in Baddawi refugee camp, a key research site for the Refugee Hosts’ project. The book also includes critical reflections on the poetry of Refugee Hosts’ writer-in-residence, Yousif M. Qasmiyeh, whose work you can read here.

In her contribution to this BBC Radio 4 programme, Dr. Rowlands discusses the impact of immigration on public and political debate and argues that, with regard to current attitudes and responses to migration, we are paying the price for a political environment that has failed to pay attention to a range of cultural, economic and political questions. Anna discusses these questions in addition to drawing on her experiences of faith communities in the North of England that, within the context of immigration, can become spaces of encounter, where the plurality of interpretations of religious text and experiences, particularly during migrant journeys, can lead to the emergence of new faith practices, valuable to host and migrant communities alike.

Listen to the Bridging Voices Religion and Social Justice for Refugee’s Principal Investigators discuss British Council USA research that we are contributing to via Refugee Hosts.

On 12th October 2018, Refugee Hosts PI Prof. Fiddian-Qasmiyeh provided the keynote lecture: “From the Local to the Global: The Roles of Local Faith Communities in Refugee Situations in the Global South”, and was interviewed at the ‘Welcoming Refugees: The role of religion’ conference organised by the Department of Ethics, Law and Politics at the Max Planck Institute for the Study of Religious and Ethnic Diversity.

The 2018 anniversary symposium of the Center for the Study of Social Difference (CSSD), What We CAN Do When There’s Nothing To Be Done. 10 years of CSSD

On the 2nd February 2017, Prof. Lyndsey Stonebridge appeared on BBC Radio 4 In Our Time to discuss the political philosophy of Hannah Arendt alongside Melvyn Bragg, Frisbee Sheffield and Robert Eagleton. Read more about her appearance here.

Listen to the episode here.

On the 12th December 2016, Prof. Alastair Ager discussed his research into the tensions between secularism and faith in humanitarian engagements at Columbia University, New York. The ideas discussed in this talk are drawn from Alastair’s book Faith, Secularism and Humanitarian Engagement: Finding the Place of Religion in the Support of Displaced Peoples.

Hospitality and Hostility: The Role of Established Refugees in a Crisis

On the 1st November 2016, as part of UCL’s Lunchtime Lectures series, Prof. Elena Fiddian-Qasmiyeh discussed her research into displacement, and the important but often overlooked role established refugees are playing in responding to conflict-induced displacement from Syria.