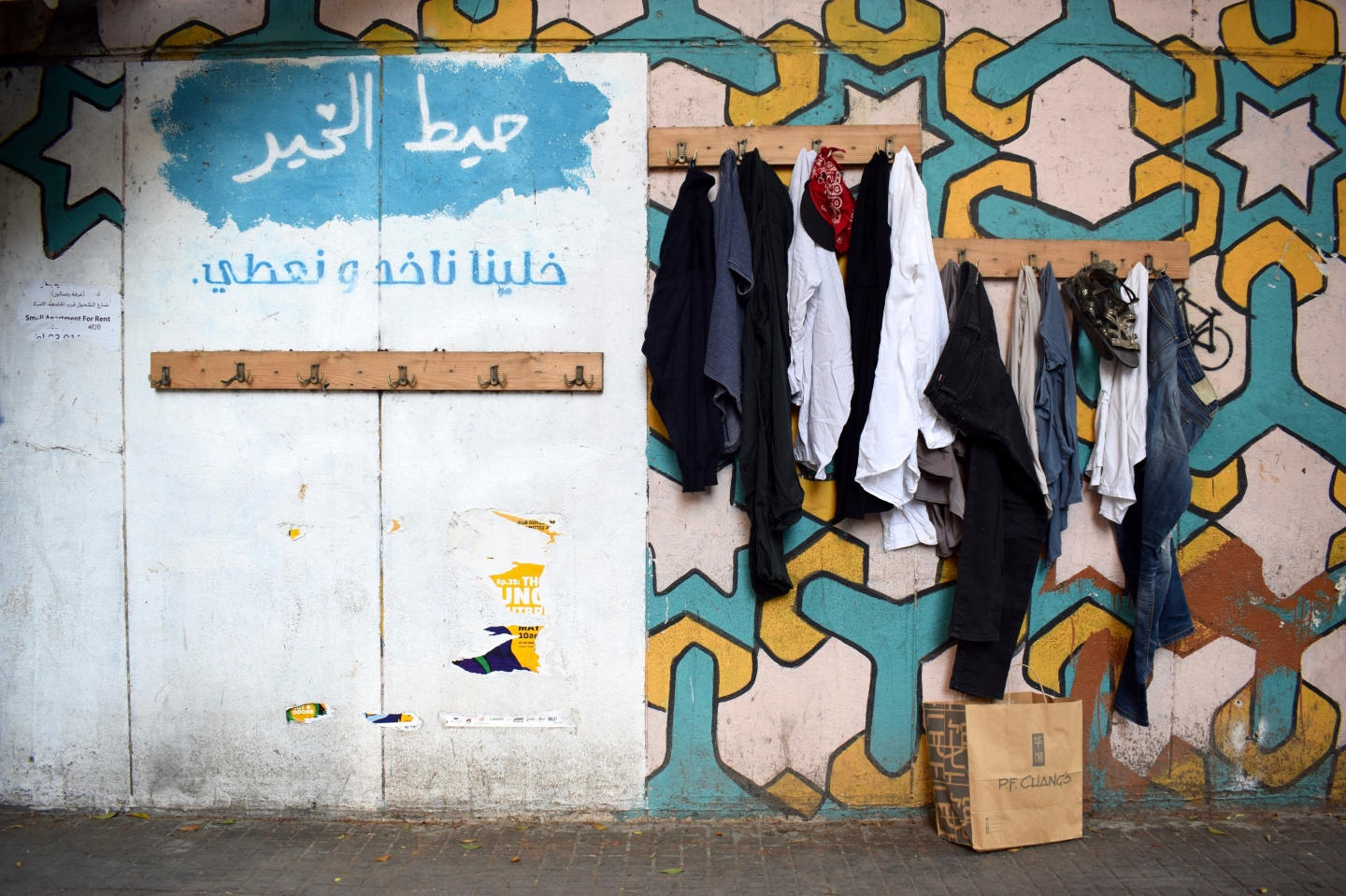 ‘Random Acts of Kindness’: Reflections on Everyday Responses to Displacement in Hamra

In this photo essay depicting areas of shared support in Hamra, Refugee Hosts’ researcher, Leonie Harsch, reflects on informal acts of charity or giving. These ‘random acts of kindness’, which enable a fluid transition between categories of refugee and host, migrant and local also explored by the Refugee Hosts project here and here, operate without the need for intermediary organisations, and help to symbolically shape spaces of solidarity and support in the public sphere. These spaces include a ‘wall of kindness’ where clothes can be anonymously left and collected, a mosque that provides a hanger and fridge for food and clothes to be left, and supermarkets and vegetable shops where food is donated or reduced in price. Harsch argues that these examples of informal exchanges represent humanitarian action that goes beyond and disrupts the dominant mainstream narrative constructed in and by the global North and that often imagines humanitarian assistance as institutionalised and Northern-led. Instead, and in line with the Refugee Hosts project more broadly, Harsch makes visible the manifold individual and local level actions of giving and receiving found in circumstances of displacement.

‘Random Acts of Kindness’: Reflections on Everyday Responses to Displacement in Hamra

Hamra hosts several sites where food or clothing is informally given and received. Moving around and going about everyday life in this neighbourhood of Beirut, one encounters a variety of places where such exchanges take place – sometimes visible and sometimes less visible, only known by word of mouth. What these responses to needs – needs brought about by displacement and other reasons – have in common besides their high degree of informality is a fluid transition between categories like ‘refugee’ and ‘host’, ‘migrant’ and ‘local,’ in terms of who is the giver and who the receiver. This photo-essay depicts a few of the places where such support is shared, and which the other locally-based Refugee Hosts researchers and I have encountered throughout our year of fieldwork in Hamra.

These forms of charity in everyday contexts, one of which a Lebanese activist described as enabling ‘random acts of kindness’, take place in the absence of intermediary aid organisations. They complement a wide range of support for refugees and others provided by local volunteer groups, faith communities, charity associations, and NGOs, in addition to a few international organisations operating in the area, and it is difficult to estimate the scale of their reach. The point I wish to make is that, beyond providing quantifiable assistance to individuals, such informal initiatives may be perceived to play a role in symbolically shaping spaces of solidarity and support for un- or little-known others within the neighbourhood. This thought resonates with the importance of feeling accepted in the place of refuge and receiving emotional support from the local community – a point that several displaced people emphasised in interviews when sharing their reflections on meanings of ‘hosting’, and which are being further explored by the Refugee Hosts project (see here and here).

In line with the broader Refugee Hosts project, this reflection on everyday response by no means intends to suggest that such initiatives at the local level can replace global political and structural solutions to poverty and displacement (also see here); nor does it suggest that they are or should be substituting thorough, rights-based forms of assistance for people in precarious situations as long as such solutions are not realised. Yet, the examples of informal exchanges featured in this photo-essay point to notions of charity that go beyond and disrupt the narrative which, at least in the global North, commonly imagines humanitarian assistance as primarily embodied in large Northern-led and highly institutionalised organisations. Acts of giving and receiving take place in manifold additional, disclosed or anonymous, forms in everyday life, including what Fiddian-Qasmiyeh refers to as the ‘poetics of undisclosed care’. For myself, having been raised in Germany, the process of mapping responses to displacement in Hamra has also meant developing an awareness of such forms of support that are not branded by familiar logos, and of the meanings attributed to them, as they are negotiated by recently displaced people and long-term residents alike. 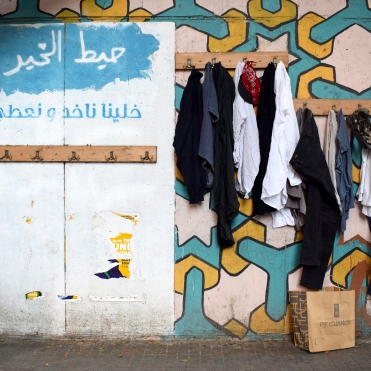 ‘Let’s take and give’ is written above the hooks attached to a wall in the Hamra neighbourhood, inviting passers-by to exchange clothes, shoes, and other things. The ‘Wall of Kindness’, as it is named, was initiated by an informal group of individuals whose strict anonymity is part of this idea, as one of them explained to me: inspired by similar projects in India, Iran, and Pakistan, the wall was created to enable what he called ‘random acts of kindness’, and to allow those who give what they don’t need, as well as those who take what they can use, to remain anonymous. Anyone can simply deposit things, and there is no need to register or ask to receive something. Without formal administration or monitoring, the initiative also considers itself to be an alternative model to, and symbolic critique of, the procedures of large NGOs, which are perceived to spend a lot of funding and donations on overhead expenses, as one of the activists behind the project stated. 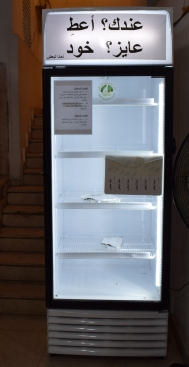 A mosque, located a few hundred metres away from the ‘Wall of Kindness’, offers a similar space and infrastructure for informal exchanges. It invites people who have something to give, and people who need something, to take or leave clothes or food, by providing a hanger and a fridge that are openly accessible from the street.

A supermarket invites customers to pay for an extra bag of bread and then to pin the receipt to a board placed next to the counter. From there, anyone can take a receipt and redeem it like a voucher. 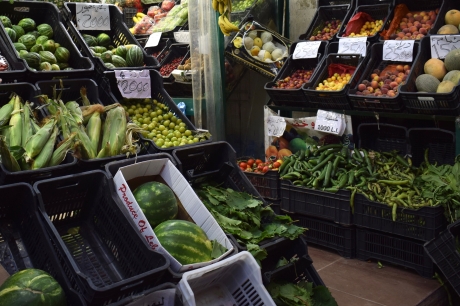 A vegetable shop in Hamra regularly lowers the prices for refugees, as a woman displaced from Syria told my colleague Hanaa Dahdal and me in an interview when asked what forms of support she received. The man running the shop, himself Syrian, later explained that vegetables are offered at discounted prices and sometimes for free to anyone in a difficult economic situation, including Bangladeshi and Lebanese people. He considered this to be a form of good deeds towards the poor, which his religion obliges him to undertake. 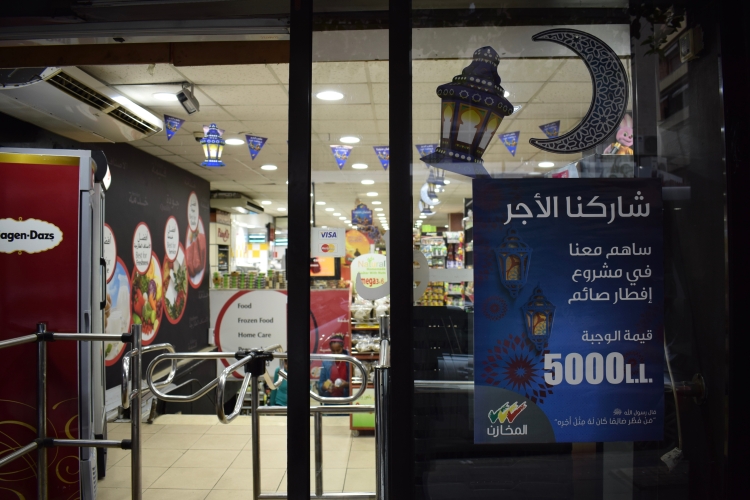 During the month of Ramadan, a poster at the entrance of a supermarket called upon customers to contribute a certain sum of money to help fund iftar meals distributed in the evenings for people to break their fast at sunset. According to an employee, the shopkeeper would add the remaining amount. (On refugee-funded iftar baskets in the context of Baddawi refugee camp, see here.)

Free meals are offered all around the year by a local restaurant, whose staff members include several refugees. A certain number of portions of the daily dish are set aside to be distributed to people who cannot afford the costs. As this is not officially advertised anywhere, people are informed by word of mouth. 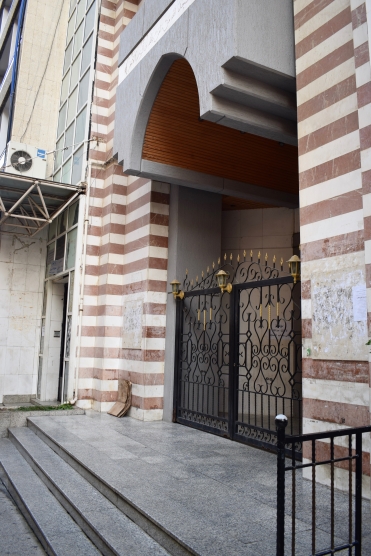 In comparison to other parts of Beirut, a lot of people work on the streets of Hamra, begging and selling roses or chewing gum. Their backgrounds and their reasons for being there are subject to contestation. Many come to the neighbourhood during the day-time, often to the same specific spots on the pavement, whilst living in lower-cost areas. Some stay, such as a man who regularly spent the nights on a piece of cardboard on a corner near my house, whom I only encountered asleep when leaving the building in the very early morning. Sometimes, passers-by or people working in shops can be seen giving some money, food, or water, and many individuals gather around the entrance of mosques, where they receive bread and other things from people – refugees and hosts alike – who attended Friday prayers.

If you found this piece of interest, please read our recommended series and pieces below, or listen to the listed recordings.

Reflections from the Field Series

Fiddian-Qasmiyeh, E. (2018) Reflections from the Field: Introduction to the Series

Itani, B. (2019) The importance of identity – reflections from fieldwork in Hamra, Beirut

Rowlands, A. (2018) Faith and Displacement:  Introducing the Series

Stonebridge, L. (2018) Undoing the Meaning of the World: Creation and Decreation in Contemporary Refugee Studies

Featured image: The Wall of Kindness in Beirut’s Hamra neighbourhood, where people anonymously leave items of clothing for anyone who might need them. (c) L. Harsch, 2018