This piece, by George Mantzios (whose artistic and creative work is completed under the pseudonym Yanni Ye) offers a visual representation of the Mediterranean ‘Migration Crisis’. Yorgos’ work also reflects on the role of art as a form of hosting, capable of articulating meaningful encounters that are built on ‘vernacularised’ art practices. The Refugee Hosts project is interested in such creative approaches as a means of challenging or questioning more traditional forms of refugee representation, something we are exploring throughout our project, including through our ‘spaces and places, not faces‘ approach to photography, soundscapes, and poetry, amongst others. Visit our creative archive for more, including other pieces published as part of our Representations of Displacement series.

By Yanni Ye, University of Toronto

i want to go home,
but home is the mouth of a shark
home is the barrel of the gun
and no one would leave home
unless home chased you to the shore

I turn this map around,

for the world is all burned up:

East and West, a heap
of ash gathered
in the self-same grave.

I spent the first half of July in Lesvos attending an international postgraduate summer school jointly organized by the Department of Social Anthropology & History of the University of the Aegean, and the Institute of Migration and Ethnic Studies of the University of Amsterdam. Entitled “Cultures, Migrations, Borders,” the summer school was dedicated to exploring how migrations and border crossing practices are shaped in spaces of cultural encounter, with particular focus given to the contemporary geopolitical conjuncture of mass migration from the Middle-East and North Africa into Europe via the Eastern Mediterranean.

The image below is an iconographic constellation of my impressions of this “migration crisis” while on the island. Apprehending this crisis as a crisis of representation in humanitarian and European border security discourses alike, my drawing attempts to make visible the way both are differentially complicit in reductively reproducing the refugee as a figuration of a shared vulnerability, one that renders migrant bodies legible to non-refugee actors preoccupied with their own moral accounting.

My work addresses this crisis of representation from the perspective of the geospatial logics of borders that condition it. I attempt to call into question the topographic desires that reproduce normative imaginaries of global space in terms of naturalized boundaries of (un)belonging and (in)difference. I submit this image then as a provocation: to redraw the map of our collective sense of historical reckoning in the present so as to open up spaces of unsuspecting reference, affiliation and critique that call to account the imperial afterworlds of displacement and dispossession. It is along these lines that I perceive my work’s relevance to the theme of hosting, i.e., through its concern with sighting the geopolitical and historiographical stakes that make hosting (in)conceivable as either a temporary passage onwards or a recalcitrant internment of desires to be elsewhere and otherwise.

Situated somewhere between satirical cartoon, political mural, and surrealist psychogeography, this image thus serves as a visual allegory of the ways hosting can take and (un)make place. Below I offer a supplemental translation of some of the image’s details, attempting to elaborate these into a gesture of world-(un)making by reframing figurations of displacement in ways that call into question unexamined images of homeland. 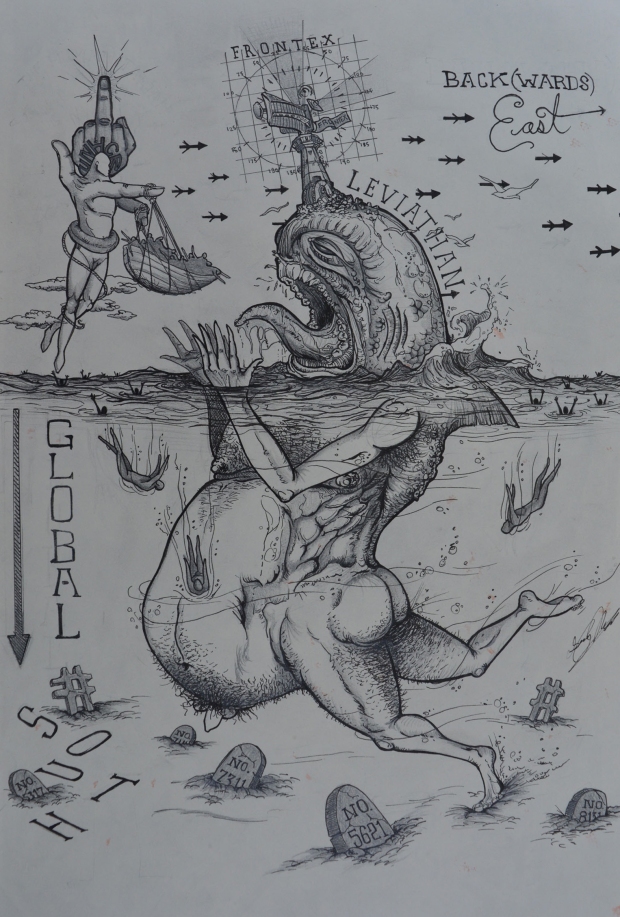 From left to right, or West to East: a flock of arrows migrating off the pages of yesteryear’s military maps, droning on and on in UNCHR infographics; droning on and on, along the aridity line, from Libya to South Waziristan, heat-seeking the borderline between the mirage of Escape and the desert of Return – a European frontier.

Everything leads back to the faceless angel of History, this cipher of a liberal humanitarianism, shepherding the flock of arrows, delivering the boat of migrants from…or to the Leviathan’s maw. Stare directly into this ellipsis: three dots, three coordinates that triangulate, Bermuda-like, angel, boat, and beast. All compositional considerations were directed towards rendering this ambiguity – towards or away – into an off-centered focal point, a blindspot designating a parallax view of the world as it does not and cannot appear on GPS.

Thus the maw of the beast is already too literal if identified with the gapping mouth of the Leviathan. The maw is more the radar-sieve crowning it, tracking it. And yet, still, this is somehow too obvious, too visible.

After all, following Judith Butler’s (2009) admonition, we must learn to see the frames that blind us to what we see… That the blank face of the angel is the repository of the Leviathan’s maw; the Leviathan’s maw, the angel’s hollowed-out mask, its shell. We are thus left with a core of blindness, a zone of indistinction, of (in)betweeness; the call for help and the response that preempts it.

I designate this blindspot a monument to the impossibility of bearing witness to the faces, identities, lives that are everywhere missing, redacted, nowhere to be found, on a grid, in an asylum application, in the myriad technocratic figurations of survival that screen these lives through the maw that processes them, their papered identities. I designate this blindspot a de-monumentalizing monument to that sinister pyramid of human needs, Europe’s, the one that condemns those fleeing wars of imperial design to the pyramid’s lowest strata, and has the audacity to call the provisioning of this ontological reduction, “humanitarian aid.”

In compositional terms, this blindspot is conjured through the disorienting intersection of two conflated perspectives: the realist perspectival depth of the sea’s surface, conveyed by the progressive miniaturization of drowning bodies; and the lateral flat depth “southwards” to the sea floor. This latter perspective works as cross-section; i.e., an autopsy of a death toll that litters the sea floor, the only indication of land in the piece; the only suggestion of Europe as destination, that is, as final resting place.

By invoking the flat earth as a representational trope I attempt to subvert the anachronism of the geo-historical assumptions that reproduce imaginaries of a global space polarized along a North-South axis, where the North is too easily reified – in condemnation or congratulatory conceit – as the cardinal direction of historical reckoning. Indeed I see this anachronism as being subverted by the practices and histories of migration and border crossing, which upend taken-for-granted conventions of departure and arrival, loss and (re)discovery, interrupting the use of these conventions as reliable coordinates with which to map the variegated life-worlds of refugees. By animating this subversion as it occurs in the subterranean depths of the sea – the Black Mediterranean (Danewid 2017) – my aim is to convey the North-South imaginary of global space in its necropolitical dimensions.

Such modes of representing displacement may allow us to reanimate spaces of dispossession and marginality in ways that ceaselessly erode unexamined and stereotypical images of homeland. What this calls for, I believe, is an ethic of hosting informed by collaboratively vernacularized art practices capable of reanimating interstitial sites of cultural encounter so as to reimagine, relay, and reinhabit the different multipolar worlds germinating in the wounds of a torn Eurocentric humanism and the historicism of its post-colonial hurt.

Read more submissions to our Representations of Displacement series here. 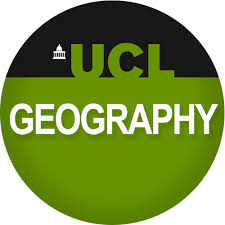